Weblog of the Education for Peace Initiative at Prajnya

The noblewoman who made possible the Nobel Peace Prize!

The Nobel Prize has become a benchmark of excellence the world over. The Peace Prize has been one of the most keenly watched and bitterly debated. Indians or India-related personalities have been the recipient of the Peace Prize three times: Kailash Satyarthi in 2015, the Dalai Lama in 1989, and Mother Teresa in 1979.

Bertha’s story is so amazing it can fill the pages of several Victorian novels. She was born in Prague in 1843 into an aristocratic family; however, her father died before she was born and her mother was of a lower social strata. This meant that she could not enjoy the status of an aristocrat and Bertha and her mother had to relocate to her guardian’s house. Soon, her aunt and cousin also arrived at Bertha’s guardian’s house, and she was introduced to the pleasures of literature by her cousin. 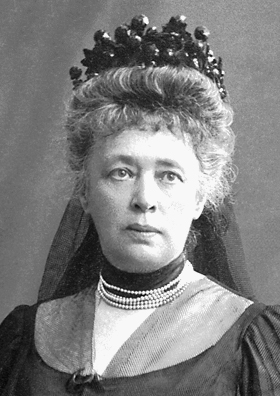 Bertha’s mother and aunt had a gambling problem, and they frittered away many a fortune, eventually leading to Bertha having to take up a job as a governess to four girls at the house of Karl von Suttner, an Austrian aristocrat. She fell in love with the girls’ older brother Arthur, a match strongly disapproved by the Suttners.

Here’s where she came into contact with Alfred Nobel.

Bertha answered an ad placed in the newspaper for a secretary and housekeeper for the millionaire businessman, Alfred Nobel. She quickly gained his confidence and over time, became a friend to him as well. Although her employment was brief, she continued to correspond with him until his death.

After her brief employment with Alfred Nobel, Bertha and Arthur eloped to Georgia. Here, with the blessings of the ruling family, the couple tried various jobs including that of teaching languages and music, writing for various newspapers, translating books from other languages, and even a timber business!

In Georgia, Bertha’s writing and leaning towards pacifism grew stronger. She first hints at it in her 1883 book, “Inventory of the Soul” where she argues that peace is the original state of the world, and that wars and conflicts are aberrations, made stronger by powerful weapons.

With Arthur’s family finally accepting Bertha into their household, the couple moved back to Austria in 1885. Bertha continued her journalism, with a focus on peace and conflict studies. Her pacifism was heavily influenced by the philosophy of stalwarts such as Immanuel Kant, Leo Tolstoy and Charles Darwin.

Her most important book, the one for which she won the Nobel Peace Prize, was “Die Waffen nieder” (Lay Down Your Arms!) a novel spanning four wars. The hugely successful book, published in 1889, tells the story of a woman who experiences first-hand the destruction caused by wars.

During her correspondence with Alfred Nobel, Bertha wrote extensively of her ideas regarding peace and disarmament. When Nobel established his will, it is widely held that Bertha’s pacifism played heavily on his mind, enabling him to include Peace in his list of prizes to be awarded.

According to the Nobel Prize website, in 1893, Nobel wrote to Bertha of his intention to set up a prize to be awarded “to him or her who would have brought about the greatest step toward advancing the pacification of Europe.” A few months later, his will included a generous bequest to Bertha’s Austrian Peace Society, as well as prizes for scientific achievements, once every three years, including “efforts to promote the establishment of a European tribunal.”

The final will, however, included Peace as one of the five prizes, and he obviously expected Bertha to win it. She did, of course, after a four-year wait.

She remained an influential figure in the anti-war movement, arguing that the Right to Peace should be a fundamental right under international law. She also one of the founders of the Austrian Peace Society, to which Nobel was a generous donor. She continued speaking against war and armament, until her death, ironically, weeks before the First World War, in 1914.